I am on vacation now, having spent a week in Finland and about to pop down to the Baltic states. The Finnish National Museum is a fine museum as these things go, starting 18,000 years ago when the ice began to melt, then through prehistory, then through the 500 years or so when Finland belonged to Sweden, and then Russia, and then itself.

Near the end is a wall of stolid official portraits of Finnish Presidents, which people respectfully breezed by until they started doing things like this:

After this came a wall of listening stations where you could sample Finnish metal, along with a proud notice that Barack Obama had noted that Finland was most famous for two things: good governance and metal music.

Something else strikes you about Helsinki: public amenities work. There is some graffiti, but it’s not omnipresent as it is in Germany. I didn’t see a single tram or metro car with graffiti on it. Nor did I see any with key-scratches in their windows. This is what happens when the graffiti gets removed too quickly; the antisocial morons instead start scratching or acid-etching their idiotic symbols directly into the plexiglas windows of streetcars. This is so common in Germany that there’s even a German word for it: Scratching (g). Since the glass is ruined, it has to be replaced, costing German taxpayers millions.

There are desperate-sounding notices in many German streetcars offering 500 or 600-euro rewards for information leading to the capture of people who do this, but I’ve never heard of anybody claiming one. There’s simply no way to patrol all of the streetcars thoroughly enough to catch even a fraction of the people doing this, and the only penalty will be a fine of a few hundred Euros. If the scratchers are juveniles, there won’t even be that.

This is a classic example of a public good that can only be maintained by general, voluntary adherence to norms and values. And that’s what’s missing in many big German cities. Even in Düsseldorf, which is a prosperous and well-run place, every second streetcar has a scratched window in it. The ones that go to parts of town with lots of foreigners in them look hopeless; there are some windows you can barely even see out of, as rival teams over-scratch each other’s tags. The people in the trams have reacted with learned helplessness, or you could even say learned hopelessness. Having nice public streetcars is just one of those nice things we apparently can’t have anymore.

(Another thing Helsinki has is a public bike-share system in which every single bike works. God only knows what would happen to these bikes in most German cities. They’d probably be used to break escalators, another fun hobby of the young and stupid.)

Is this all down to foreigners? No, there are surely some asocial young Germans who do this sort of thing. But let me drop a truth bomb on you here: Scratching is mostly done by young males with, as it’s put delicately in Germany, a “migration background”. I’ve seen scratching being done live before my eyes in passing streetcars about 10 times, and every single time it’s been a group of young men with what is delicately described in German as a “southern appearance”. Every single time. Anyone who denies this is an imported problem in Germany is, as we Americans like to say, pissing on your leg and telling you it’s raining.

When you bring this up in educated liberal circles, the general response is a lot of hemming and hawing about how these problems are created by “disaffected” young people who feel “excluded” and “marginalized”. The solution is “education” and “sensitization”, and opening up more teen centers, and fostering “more pathways to social inclusion”. After a while it begins to sound stale and forced, like some filmstrip from a 1970s social-worker training seminar.

But even in educated liberal circles, after the 6th or 7th glass of burgundy, Klaus the ad-man or Bettina the psychologist will sometimes pipe up and say: “You know what? Fuck all that stuff about sensitivity and integration and inclusion. I ride to work every day on the metro to save the environment, and I just hate the fact that the windows are all scratched. It’s pointless and idiotic and depressing. Whoever is doing should be thrown into fucking prison, or kicked out of the goddamn country. I know I sound like a right-winger here, but it really just gets to you because it’s so goddamned stupid and pointless. There’s no excuse for it. I don’t want to ‘understand’ the ‘context’ that makes people do this, I want to cut their fucking hands off. It’s gotten so depressing that I’m going to buy a car, even thought I don’t want to, just so I don’t have to have see this every day.”

I’ve seen this scenario unfold many times at dinner parties. After this, an uncomfortable silence descends, and then someone mentions the latest political scandal.

Prosperous, well-ordered Northern European social democracies live, to paraphrase Böckenförde, from preconditions they themselves cannot guarantee. Import enough people who don’t understand — or who reject — the implicit social conventions of these places, and society begins to slowly develop cracks.

These countries have two choices. First, like Germany, they can permit uncontrolled mass immigration from culturally remote countries and, in particular, from the social classes in those countries which have no familiarity with political and social systems like those of Northern Europe. That is, from the lower-middle and working classes. The lower classes of these societies are notorious for lacking an appreciation of public spaces and public property; if I don’t own it and nobody else (or at least nobody powerful enough for me to respect) does, it doesn’t matter how I treat it. (Their homes are usually pristine, because this is property they own and care about. It’s public places which are treated poorly. It’s a cultural thing.)

After you import very large numbers of these people (not homeopathic doses like Finland), you notice things changing in your country. The parks are littered with trash dumped mainly by foreigners. Streetcar windows are scratched. Certain kinds of crime rise. The native population becomes ever more frustrated, and begins voting for the only parties which dare to talk about the problem: the right-wingers. And then come the sociologists, criminologists, social workers, and politicians, with the classic four-step response. (1) At first, they defensively deny there is any problem. (2) Then, forced by overwhelming evidence, they admit the problem exists. (3) Then they claim it’s really caused mostly by native Germans, Swedes, or French people, so associating the problem with foreigners is racism and xenophobia.

Then, gradually, some or even most of them are forced by overwhelming evidence to step (4), in which they admit that yes, the problems are disproportionately caused by foreigners. Then they start with vague promises to “investigate the root causes” of the problem, and “sensitize the relevant population groups” to “certain cultural norms”, and to build more teen centers and create more training programs (at taxpayer expense, naturally, since these groups are assumed to be unable to address the problems themselves) for those “disaffected youth” who feel “marginalized and excluded”.

A country can, if it wishes, go through all of that long, painful, expensive, and conflict-ridden process.

Or you can be like Finland, which has strictly limited the number of foreigners it has accepted from very different cultures. And which has clean, beautiful cities, pristine streetcars, and public bike-share programs which work like magic.

Everybody loves the Fraktur font:

There’s something spine-tingling and half-forbidden about it, because lots of old documents in German are written in Fraktur, and who knows what kind of horrible things they might say? (I know what you’re thinking, but no, it wasn’t invented by the Nazis. By the time they came to power, it had been largely superseded. At first revived it on the grounds that it was ur-German (g), but later decided to severely limit its use. Especially in German-occupied Europe, they replaced the difficult-to-read Fraktur with Antiqua.)

WTF, ‘Gustav Eisen’? Get with the program!

A friend of mine used to work at a bank doing numbers stuff. One of the things banks have to do is determine how likely people are to repay their debts. And because actual money is on the line, they ignore politically-correct pieties. If the numbers say one nationality is more likely to repay than another, that goes into the algorithm.

My friend, who is not German, said it’s well-known all across the banking world that Germans are more likely to repay their debts than almost any other group on the planet. Nobody knows exactly why, but this stereotype is so reliable that banks even figure it into their algorithms and lending policies. I asked her which nationalities had a worse reputation for repaying her debts, but she politely declined spill the beans, since this information is strictly for internal consumption.

Having a high overall rate of debt repayment doesn’t just benefit borrowers, it benefits everybody, all the time. It’s easier to get loans, and you get them at a lower interest rate. Therefore, there’s more money in productive circulation. Everyone is slightly more prosperous.

Social trust works in the background all the time, making certain countries so much more pleasant to live in than others.

Which brings me to a fascinating comparative international study of honesty, summarized by James Thompson here. Demographically similar cohorts were recruited in a number of countries, from Germany to Morocco to Tanzania, and invited to play dice game which had real monetary rewards. They were allowed to play the game alone, unobserved, and reported their results on the honor system. The result: 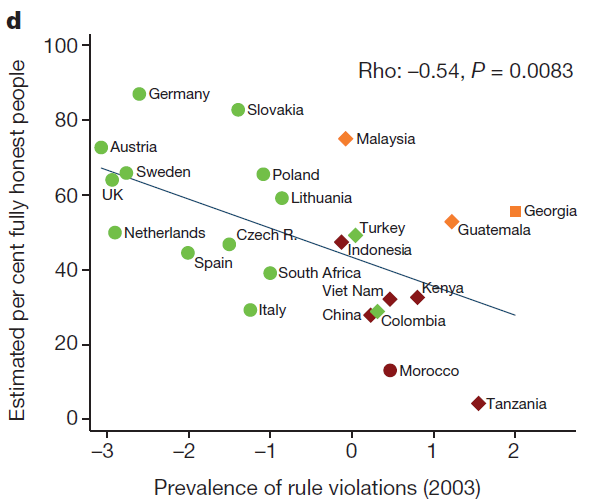 According to the study, Germans and Slovaks have the highest estimated proportion of honest people of all the countries studied. And this has many beneficial knock-on effects, as the study’s authors point out:

Good institutions that limit cheating and rule violations, such as corruption, tax evasion and political fraud are crucial for prosperity and development. Yet, even very strong institutions cannot control all situations that may allow for cheating. Well-functioning societies also require the intrinsic honesty of citizens. Cultural characteristics, such as whether people see themselves as independent or part of a larger collective, that is, how individualist or collectivist a society is, might also influence the prevalence of rule violations due to differences in the perceived scope of moral responsibilities, which is larger in more individualist cultures.

If cheating is pervasive in society and goes often unpunished, then people might view dishonesty in certain everyday affairs as justifiable without jeopardising their self-concept of being honest. Experiencing frequent unfairness, an inevitable by-product of cheating, can also increase dishonesty. Economic systems, institutions and business cultures shape people’s ethical values, and can likewise impact individual honesty.

The authors of the original study, Simon Gächter & Jonathan F. Schulz, attributed the differences to cultural matters. But Thompson and Heiner Rindermann took the study data and found that the correlation between national-level IQ and honesty was even stronger than for the cultural factors the authors’ initial study pointed to.

Whatever the reason, living in high-trust, high-honesty societies is just another of those blessings which Germans take for granted, unless and until they move to a society which doesn’t work like Germany does.