This GWOW amuses English-speakers because it begins with a false friend. But then it gets very German, in all senses of that word.

A ‘Thing‘, Wikipedia tells us, was “the governing assembly of an early Germanic society, made up of the free people of the community presided over by lawspeakers.” In other words, a sort of proto-parliament, usually held outdoors at a symbolic grouping of stones or large tree (perhaps a Gerichtslinde or “court linden”). There are very few records of Things left, and few ruins which can be positively identified as Thingstätte (Thing-places, pronounced approximately TING-steh-tuh). Nevertheless, they were important institutions — many Scandinavian parliaments have some form of the word “ting” in their official title.

But Germanic Thingstätte had a disturbing second life, as with so many things Germanic. The völkisch movement in Germany, and later the National Socialists, decided to revive the ancient tradition of the Thingstätte. The new versions weren’t supposed to be parliaments, but rather outdoor gathering places where the faithful could assemble to revere nature, the Germanic soul, and other nationalist topoi*.

Party groups, or the Hitler Youth, would assemble at the Thingstätte for Thingspiele, multi-disciplinary events which might feature torchlight processions, speeches by academics or ideologues, choral singing, patriotic dramas, sporting contests or similar collective celebrations of things young, healthy, vigorous, and Teutonic. Nazi-era Thingstätte in Germany — of which 400 were planned, but only 40 built, are often huge, with oval-shaped amphitheaters with seating for thousands, usually set on hilltops. This means they’re quite hard to get rid of, and still generate controversy, since they are massive and indelible reminders of the Third Reich. They attract visitors from the unsavory right-wing fringes of German society, as well as from people who want to revive ancient Germanic traditions such as Walpurgisnacht (there is some overlap between those groups, but it’s far from 100%). I once visited perhaps the most famous Thingstätte, in Heidelberg, and saw only yuppies jogging up and down its steps.

And today I just learned, from the magnificent ars publica düsseldorf** site, that Düsseldorf had its own Thingstätte, way off in Gerresheim, a working-class suburb in the eastern part of the city. It was built in 1935, partly as an employment-generating measure for World War I veterans. Now, it’s pretty much completely abandoned, and surrounded by privately-owned houses: 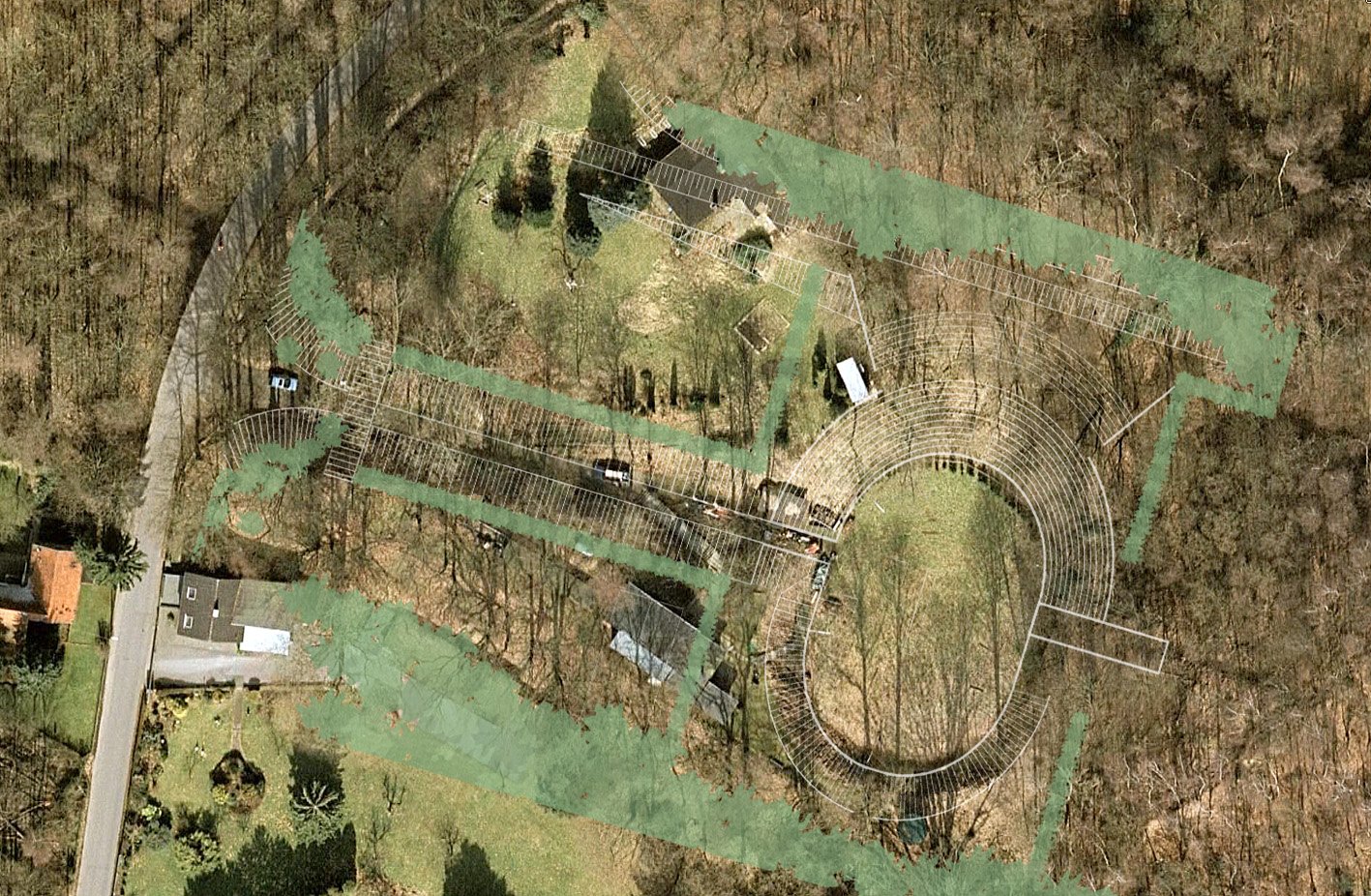 It included a big 220-step path up a large hill, at the top of which was a massive boulder with a memorial inscription. I bet a ruined Thingstätte would be pretty interesting to visit (after getting necessary permissions, of course), so it’s now at the top of my list of things to see and do in this endlessly-fascinating city.

* Yes I know it’s academic jargon, but it fits.

** A wonderful site growing out of a massive book project documenting all of the public art in Düsseldorf. A must for all local-history buffs like me.

One thought on “German Word of the Week: Thingstätte”