Let me start this post with cliché: Germans like to collect, organize, and classify things. If you have a problem with this “stale cliché”, then you’re at the wrong blog. Here, we fully embrace the science, which shows that most clichés have a sound basis in reality. Besides, calling an observation about some social group a stale cliché is itself a stale cliché. Touché, bitches.

If you’re still with me, I’d like to highlight one of the most delightful fruits of the German passion for organization and preservation: ludicrously specific museums. Today, it’s the Nieheim Sack Museum (g), located in the no-doubt-charming 6,250-person town of Nieheim in Westfalen, Germany. Located in a handsome red-brick former agricultural products warehouse, the museum promises entry into “the world of old and new sacks”. Here are just some of the back-to-back stacks of slack sacks you can admire:

But sacks are only the tip of the seed-storage iceberg, so to speak. There are also exhibits devoted to sack-making, sack repair, and even a Sackausklopfmaschine: A “sack-smacking” machine.

There’s also a local history museum run by the local-history group (the Heimatverein), and a historical kitchen, in which you can take “cheese seminars” and learn how to make local Nierheimer cheese. The Nieheim Sack Museum also landed a curatorial coup when convinced the nearby Westfälisches Kulinarium to host a permanent exhibit devoted to the local cheese.

Nieheim may seem like a rural idyll, but there’s trouble in paradise. You would think Germany is far too small to host two sack-related museums, but you’d be wrong. So very wrong. Hundreds of kilometers to the east, just a decade after the Nieheim Sack Museum was summoned into being, another sack museum (g) was created, in Wittenburg. This new museum is devoted to flour sacks.

But does this museum call itself what it is — a sack museum? Oh no. Not by a long shot. You see, this museum has a “curatorial concept based on the experience of flour”, whatever the f**k that means. You can tell by its name: MehlWelten — “FlourWorlds”. The museum opens with a work of art made from a flour sack. Then you move into the “SymbolRoom”: 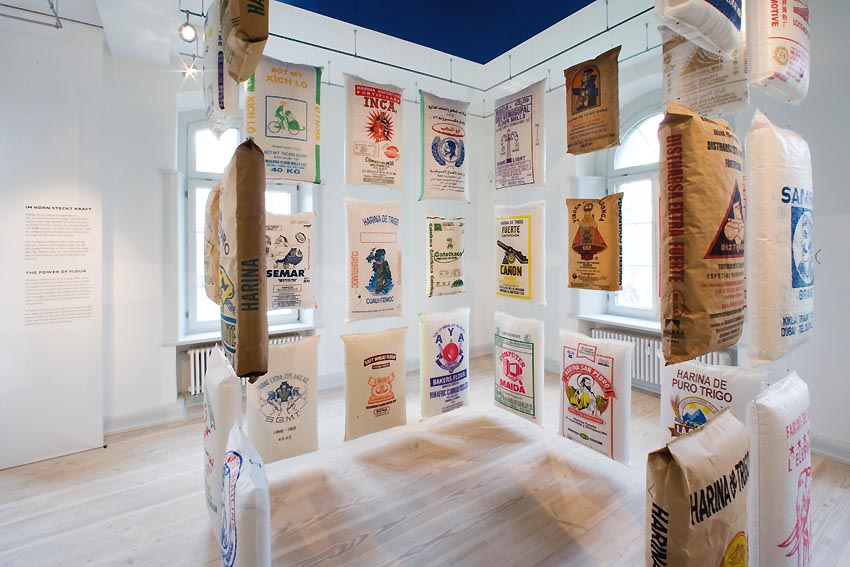 This isn’t just a bunch of flour sacks. This is an interpellation — an interrogation, if you will — of the Deleuzian/Guattarian “assemblage” which problematizes the synthetic and contested crux of commerce, banality, food, and anguish. “FlourWorlds” even has a “sackotheque”:

A “sackotheque”, for Chrissake. The Wittenburg Flour Sack Museum — oh sorry, I meant “FlourWorlds”, also has its own English-language website, a sure sign that city folk with too much book-larnin’ are involved.

Now, I don’t want to sound too jaundiced here. Let a thousand sack museums bloom, I say! But if I had to choose between one of the two sack museums, I think I’m going to go with the one which has the simple honesty to call itself what it is: a sack museum. Nieheim, here I come!