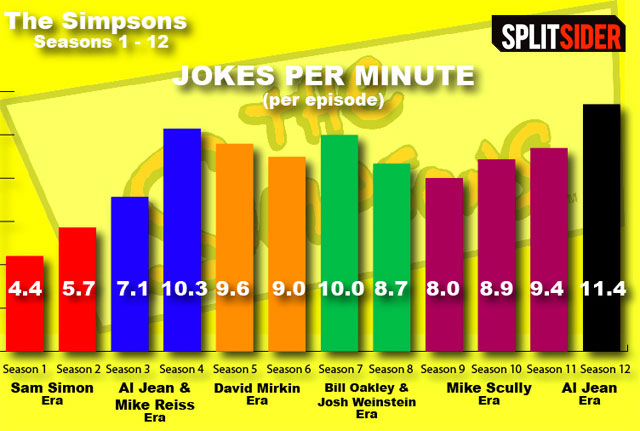 A few days ago a friend and I, in a state of complete sobriety, were comparing television sitcoms from the 1970s and the present day. The biggest contrast is the frenetic pace of modern sitcoms. The chart above shows how much faster-paced The Simpsons became during its early years. Nowadays, in any reasonably well-written sitcom (I’d cite Archer, 30 Rock, Arrested Development, The Office, Rick & Morty, Brooklyn 9-9, but of course YMMV)*, nary a minute goes by without 10-15 rapid-fire separate jokes. They can’t all be zingers, of course, but as long as the average quality is high enough, it hardly matters: you’re a deer in the headlights of comedy, dazzled and delighted by a remorseless cavalcade of whimsy!

I consider this progress: Using bleeding-edge humor techniques, TV writers now give us 3 times the laughter for the same amount of money and time. And believe it or not, German has a word for exactly this: Pointendichte. You pronounce the first half of the word Frenchified: “Pwanten”; the second half is the German word for “density”. Pointe (g), obviously a loan-word from French (let’s hope they don’t ask for it back, baDUM-tss), doesn’t mean joke, strictly speaking, more like a witty observation or clever jab. But that’s splitting hairs. So Pointendichte literally translates as “joke-density”. But sounds much classier.

English should consider adopting this word. It will be a hard sell because it’s not easy to pronounce. But still, it’s a crisp, efficient, and stylish way of describing something that doesn’t have a word in English.

And to end this post, my favorite joke — or Pointe, if you will (and you will) — from The Simpsons:

END_OF_DOCUMENT_TOKEN_TO_BE_REPLACED

Pop culture generates random flecks of absurdity which lodge themselves in a nation’s soul. In Germany, one of these gems is this scene from a 2002 movie Eighteen-and-a-half (g), a type of flick we used to call a ‘specialty feature’ in English:

Girl: “So, here’s the fuse box we’re having problems with, so you can take a look.”

Man: “Sure, but why is there straw everywhere?”

Girl: “Why are you wearing a mask?”

Someone found this stretch of dialogue amusing, and stuck it on the Internet in 2002. It went viral, as they say, and now every German under the age of 40 knows this scene. All you have to do is mention “straw lying around” somewhere and people will break out in knowing smirks or, if there’s been drinking, lusty re-creations of the “electrician’s” visit.

A German documentary team later investigated this piece of history tracked down the director of the movie, Nils Molitor. Here is his interview:

For the scene in question, he had hired a guy from Berlin who “had a giant cock”. When the guy showed up, he insisted on playing the scene in a mask, since he had a job in Berlin and people who didn’t know about his side-hustle. So Molitor, with the ingenuity of a Cassavetes, integrated the mask into the dialogue.

I hope you enjoyed this little foray into German pop culture. Later, if I have a moment, I’ll explain why certain Germans, the best kind of Germans, burst into laughter if you repeat the phrase: “60 kilograms (g) of ground meat”.